Am I Being Paranoid?

Ever feel like something is after you? I sometimes do.

I started to think about this more after a family dinner out last Friday. Usually it’s the six of us: my twin sis, parents, and grandparents that still live on the city. My dad and I will meet up after work, and my mom and sis will come in from the ‘burbs. And it’s a fact, we all like to drink, yet we all have very different tolerances. My dad could drink any of us under the table, but my sis will give him a run for his money. My grandmother probably could if we let her, and as for the rest of us, we are pretty much light weights. I pretend I’m not. Sometimes I can hide it.

When we go to Mexico Lindo, on 2nd Ave. and 26th st., you would be insane not to order a margarita. They don’t make it with that sugary crap. They use the juice from an entire lime and quality tequila. So gooooood. So good you want two or three when you can’t see entirely straight after one. Or least I can’t.

Once we get a buzz going, the following usually happens. My mom starts to giggle and then says comments that are completely innocent in her head, but come out in phrases that sound, let’s say, risque. One of my favorites was after two glasses of wine, my mom kept asking me if this guy I went on a date with understood the subway system, because he was an out of towner. After a few times of asking me “Did he get off on that?” and then she’s clap her hand over her mouth and laugh hysterically, right in front of my dad no less, I moved her glass away.

I swear this story has a point. Anywho–dinner last Friday was a bit tamer, except it seemed that this round of margaritas had a profound effect on our motor skills. Enter–the guacamole debacle. Now, I know a lot of people who go nuts over avocados, an addiction I cannot share because sadly, I am allergic to them. But people who love them, like my family, just lose it. When it was brought to the table and my family dug right in. And it got a little messy. It got here:

And then it flung across the table and landed here: 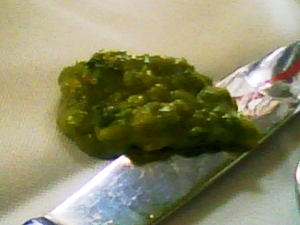 And then it got on a few more elbows and fingernails before the plate looked like it had been licked clean by a pack of wolves.

But it’s interesting how this only happens with guacamole. It’s one of those delights that brings out the gluttonous side in people, a delight I cannot share. It’s in sushi and I have to poke it out with a chopstick. It’s in certain versions of California clubs and I have to spoon it out. And there is usually a friend next to me to who will stab it and eat it all up.

But now I’m beginning to think that they also follow me around. As I was shopping for cupcakes, I found a random avocado next to the shredded coconut in the baking aisle. I had a date where the guy ordered guacamole as a starter to be nice, and when it showed up in a gigundoo sized bowl, I had to explain that I couldn’t eat it–and it’s always attractive to explain your allergies on a second date. When I go to the deli across from my office to order an egg on a roll for a buck if I have no breakfast or lunch, avocados sometimes show up next to the deli meat counter, at which Ms. Ball O’ Sunshine pointed to one and asked me if they made me nervous. I laughed it off. But now I gulp when thinking about them.

Am I being paranoid? Have you ever had an inanimate object seem to pop up in your presence a little too frequently? woooooooo