They Say There’s No Such Thing As A Free Lunch, But There Sure Is Free Coffee … On Wednesdays…

Wednesday has become my favorite day of the week–not because it’s hump day but because of this little wonder:

While it stinks that living in such a fabulous city can be so expensive, it does pay to be in a city where promotions and gimmicks are on every corner. Upon passing Bryant Park one morning, people dressed in Starbucks barista outfits were passing out green pamphlet looking things. Now, usually I don’t bother to take handouts (unless they are free samples like the free Special K cereal bars that were being given out by Grand Central in which Ms. Ball O’ Sunshine and I passed by twice), but because I knew that Starbucks was making a big announcement that day from all the postings on food blogs I read the day before, I was actually excited to see what all the fuss was about. It was soooo worth it! This little card provides me with a free cup of their new blend, Pike Place Roast every Wednesday until the end of May.

EVERY Wednesday. To a caffeine addict, this is too good to be true, and for someone who works in New York, with a Starbucks on each corner, it’s absolutely overwhelming.

The first day I got it, it was a Tuesday. That next morning, I was determined to see how many times I could use it in one day. I used it at the following locations:

41st and Madison Ave at 5pm

and a Starbucks in Hoboken, refrigerated over night for the next morning….I know, I’m sick…and I felt sick…

I was basically foaming at the mouth from de-hydration, but I didn’t care. It was allll free. And just think of how many Splendas I scored out of the deal!

Today I have only had the chance to stop by two locations. But the evening is young. I’m always excited while I leave a Starbucks with my free little tall coffee, but ordering the coffee isn’t as much fun. I’m pretty sure the baristas hate all of us cheapies. Would you like a scone with that? Of course not. Would you like a brownie with that? Of course not. I just take my free cup and then hustle over to the counter with the milk ‘n fixin’s and pretty much stuff my pockets with those wonderful yellow packets. I’m pretty sure I had to waddle away. But oh, the cheap glory of it all. 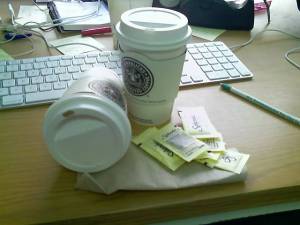