It’s 10 p.m. on a Friday night in Hoboken. It’s been raining all day, and quite honestly, I don’t really feel like slapping make-up on my face and doing my hair just so it can frizz up again the second I leave my apartment. So naturally, guess what time it is!!???

You are lucky, because you are in store for the very first round of “Guess My Expiration Date!” the game in which you guess just how long that lonely looking can or bottle of Jamaican jerk seasoning has actually been sitting in my fridge.

Let’s clarify—I can be somewhat of a pack rat—but that’s with magazines, newspapers, clothing, hand written notes—all dry material that do not have shelf lives. The food that we will be guessing on tonight I did not bought buy, and to my knowledge, has all been in my kitchen since I moved into my apartment last September 2007. And, my roommates are very neat people, it’s just that one works long hours and only eats sushi or burritos from Quodoba, and the other is actually a phantom. More about that later.

Let the games begin!! Where should we start first?? Drum roll please….the freezer!!! 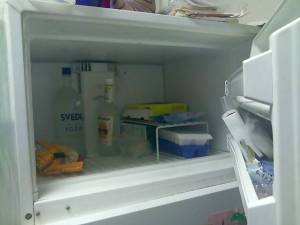 Now I must apologize, there used to be more food in here, but a month ago I went on a cleaning frenzy before giving birth to this blog and didn’t think about all the great material lying around my apartment that could possibly inspire future posts. I know better now. Anyway—let’s see what’s inside…

We’ll start with the white container. Hmm, upon shaking, it sounds like peas. I’m correct! Well, they don’t appear to have too much freezer burn, and they are still green…I’m no scientist, but I’ll let those guys slide. Next up, a box of fudgsicles. Word of advice–never let happy packaging fool you. These poor things expired April 13, 2007. That’s pretty bad, but I have a feeling there are worse discoveries just waiting for me to peel back their foil.

Now, when it comes to meat, I’m probably just going to toss it, but we’ll just have to look anyway. ICK—I have no idea what this is!

Toss. Hmm, the beef is pulling the very crafty “repackaging into a zip lock bag so no one will know its expiration date” trick. Too bad it’s just a block of ice. TOSS. 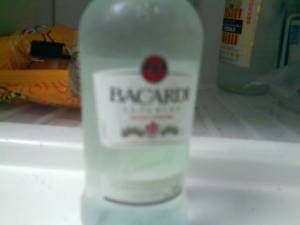 OK. Have you been keeping up so far? I’m bad at math, so I’m not really keeping score, but so far I’ve only spared the peas. On to the fridge!

I’ve seen this corn husk hiding in the dim corner above the crisper since the first day I moved in. You know what? I bet what’s waiting is so wonderful that I’ll leave that surprise to it’s owner. The thought of peeling back that husk is just too frightening. But the Country Crock next to it has met its dooms day—expired: Sept. 24, 2006. OOOH that’s the oldest one so far! What else, what else! Four reduced fat mayos, all expired, mostly 2007. One skipped out on Dec 2006. American cheese slices, expired: May 12, 2007. Pre-sliced, canned black olives, I’m not sure, but the cloudy juice alone didn’t really resemble the normal consistency or color of brine. He’s a goner. TOSS!

The tomato sauces, all six of them checked out OK, though the thought alone of having six bottles of tomato sauce among three roommates concerned me.

Hmmm. Chunky blue cheese dressing. By the looks of the separating white goo, I knew this wasn’t going to be pleasant. I was right! Expired: May 18, 2006. This one has been a goner since I graduated college! There’s a thought. While I was crossing the stage back in Lancaster, PA, to collect my diploma, this guy was sitting in the same spot on the door of the fridge in Hoboken, NJ. Awaiting my arrival. Creepy.

One of worst offenders of the group was Aunt Jemima, Lite Maple Syrup that expired: April 07, 2006. Oh Jeebus Jemima. 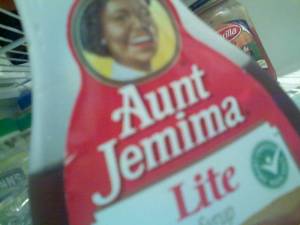 I was cramming for my last finals when you arrived. And Marie’s Italian Vinagrette bit the dust April 2006 as well. Smucker’s Sugar-Free Boysenberry Preserves, while getting points for being a weird flavor, was a goner since August 2006.

He can stay too.

And last, but not least, phantom roommate’s food shelf. It’s only down to a few items now. After I realized that I didn’t want food that was still OK to waste on her shelf, I started to eat it. I have consumed the following from her shelf: Canned chicken, crunchy peanut butter, America’s Choice red fish (generic Swedish Fish) and….hmmm. I think that’s it for now. DISCLAIMER: all of these foods were still within their safe expiration date when I consumed them. Also–I am not a mooch. I just hate wasting food. I also ate her perogies in the freezer. I’m sorry.

All in all, a recap–

I’m exhausted. Anyway, did anyone win? Winner gets to take out the garbage!!