Every once in a while, usually when we are bored at work, my friends and I will discuss what our six word memoir would be; an idea that ran through the internets like wildfire a year or so ago. I’m not sure if it was launched by a book or just a meme, but nonetheless, the game does not cease to amuse us.

Over the past year, I have come up with a few for me, such as: I live to spoon peanut butter–which is a pun that works because I have been known to wake up with a jar of peanut butter in my bed with me…usually after a buzzedly evening out…

Her friend Nina’s would be: I’m not here to make friends.

I swear, sometimes I feel as though my stomach is a bottomless pit. Sighs. It’s only 12:28 PM and I have devoured all the food I brought to work today.

I think I’m only hungry because I’m so bored. While most editors in the magazine industry (the ones who have been spared the lay-offs) are crazy busy because most have pretty much folded about two more positions into their own, over here at my little magazine, we have less and less work to complete because of two reasons: (1) not enough ads to justify extra editorial pages, and (2) we are already a staff of three people, so there is no one to cut and no one else’s work to absorb as our own. Don’t get me wrong–it’s great job security–knock on wood–but there is just nothing to do. For our May 2009 issue, I am sharing a four page article with my co-worker.

Since I can only read enough food and media gossip blogs to get through my mornings to look busy, my afternoons have become more of a contemplative time, when I weigh and consider what I should do for the remaining time until 5pm. Lately, I have decided to try and re-do our magazine’s website, which looks like it hasn’t been touched since the dawn of the internets.

One would think that taking over such a task would be an easy one at such a small staffed magazine, but no-ho00.

Ladies and gentleman, no matter what the size of the company you work for, there will ALWAYS, be this guy: 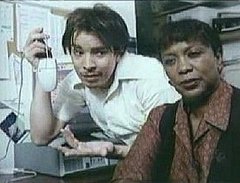 Then, after he makes you feel about 5 inches tall,  he is known for saying, “Oh…by the way, YOU’RE WELCOME!”

I’ve always heard about this tech-guy stereotype, but I never though I would actually come face to face, er, email to email with such a creature because the company I work for is to teeny. It’s always when you least expect it.

Enter: Our “web guy.” He is not a full time staffer. He is ONLY paid to upload pdfs of our current issues on our dinosaur website. Too bad he doesn’t make overtime in writing passive aggressive emails because he could make a killing.

The following emails are between Nick (I changed his name) and myself over the past few days, weeks, ie, pretty much whenever he feels like he wants to respond to me. I admit, I know nothing about websites beyond blogging, which is incredibly easy. He knows that. I know that. But would it be so terrible to just answer my questions without being, well, an ASS??

Dreamweaver (which is a development tool, not CMS per say)…

OK, I’ll take that response. Though he could have at least addressed me.

Hi Nick,
Thanks. Do you personally have Dreamweaver, or do you go to our NJ office to update the sites?

I am confused…what is it that you are trying to accomplish?

Nick appears to be perturbed.

I think we are going to try and do a little re-designing of the site, that’s why I was playing detective last week.

I know the design has not been touched for a long time. You mentioned Dreamweaver last week, do you have the software for that? No one in this office does, so I was curious.

Also, when you update the sites, how do you do so? Do you sign in under the administrator sign-in, or do you use another way?

The administrator sign-in is an interface to the databases that generate the news and archives. That’s all they were intended for. You can pick up a copy of Dreamweaver for $400 (http://www.adobe.com/products/dreamweaver/…I believe there are free options, but none that I have tested myself). I will warn you though—without experience, you’ll be in over your head before you know it and will run the risk of crashing the site at some level. Plus there is more to it than Dreamweaver…

I see we are starting to get a little heated. In over my head?? I’m just askin’.

Just as an update on the web stuff, as you were copied on the email, I found out who the web host and server are for the websites.

I don’t really have experience with all of this, but if we just wanted to modernize the look of the website, where could I go to ask questions about that? I don’t know if this is possible, but I know a lot of sites use WordPress themes for maintenance. Would this be possible? I’m not sure if I should be asking you these questions or the contact at XFire Software.

Anything is possible, but neither XFire nor I work for free.

Ahem. Really? Did I seem confused?

And the last one, for now, though now I really just want to continue writing emails I know will exhaust/annoy him:

Thanks for getting back to me. I am only thinking about the our site, not the sister publications.

I’m just trying to feel out options and what can be done. In your opinion, how could we go about updating the current site with new graphics and colors? Is this possible with any software we already have?

On Apr 13, 2009, at 2:44 PM, Nick wrote:
In my opinion you should hire a professional. And the fact that you’re asking me whether or not you have the appropriate tools to DIY, tells me you may wind up causing more harm than good.

OK. Basically, in so many words, he just insulted himself. Shouldn’t he be a professional??

One thought on “Six Word Memoirs”