Confession: for the better part of my days working in midtown Manhattan, I have brown-bagged my lunch, and for the even better (or worse) part of these days, I have unwrapped peanut butter and jelly sandwiches.

Since one of my favorite columns on the GrubSt.com site is “The New York Diet,” as a writer, I’m enforcing poetic license, and “borrowing” the idea for a new column for this blog, called, “The Splenda Stealer Diet.”

My goal is to provide a little insight into my contemporaries’ lives, and hopefully, provoke a lot of food envy or empathy for the truly pathetic meals we consume when no one’s looking.

You may not always be able to walk in someone else’s shoes, but you can surely peek inside their lunch bags.

To kick things off, I will start with my mini food-dairy until my twin sis has hers ready to post. (Ahem, twin?)

Me, circa Jan. '09 at Billy's Bakery in Chelsea. My camera broke, so this will fill in while I'm figuring out how to get new pics of myself stuffing my face.

Oh, well, this is technically a healthy breakfast, albeit an odd and kind of sad meal. Out of eggs (I usually eat hard boiled eggs in the morning with hot sauce, and sometimes with hummus) I realized that I was going to have to nibble on something that I don’t usually eat for breakfast. I’m usually starving when I get up, so I had to act fast.

I spied some leftover black beans and some asparagus pesto that I whipped up the other day, so I thought, why not just eat the ingredients that I would normally just throw into scrambled eggs anyway? I sound a lot more confident than I acted. Although I came to this realization while talking to my roommate in the kitchen, I rooted through the fridge to throw her off until she left to go back to her room, then I grabbed the beans and pesto and ran off to my room down the hall. It filled me for about half an hour.

For lunch, as a surprise treat, my mom was in the city, and I met her at the Sarabeth’s Café in Lord and Taylor’s. We had been to the Sarabeth’s on 59th St. before, and we knew they had great egg dishes, so I ordered a veggie frittata and a diet coke, and the mom ordered a spinach and goat cheese omelette that came with a raisin scone, which I took half of in my purse as a  snack for later. This was a small attempt to gear up for a night of drinks(ing) for CP’s birthday.

I’ve learned the hard way when dinner consists only of liquid calories, so I was determined to eat before I went out to Hop Devil, known for their ever-changing taps of beer, and not “lite” beer.

Drinking at this place usually reads like a five course meal. After a starter of Saratoga IPA, the next course was a round or two of Pickle Back shots: a shot of Jameson Whiskey quickly followed with a chaser of chilled pickle juice. It didn’t matter that everyone was pretty much disgusted by the idea of it—most members of the party left the bar having had a taste of the pickle juice. I also tried the Abita’s Turbo Dog, and I think there was a Blue Point Toasted Lager somewhere in there which capped off my night, as I had to leave some room for Crif Dogs, a few spots down on St. Marks.

I ordered a Red Neck, which is a deep-fried hot dog, wrapped in bacon, and smothered in chili and coleslaw. It’s not pretty, but oh my damn…tater tots and waffle fries, were also part of the party. Becky and I waited til we got back to Queens, CP tore into the bag in the cab.

I was ok! It’s amazing how a dose of grease at just the right time can make a world of a difference in the morning.

Playing it safe, when I got to work, I bought a small yogurt parfait with blueberry yogurt, and oh, a lemonade vitamin water. I’m obsessed. I really dislike water.

Knowing that I was planning on taking CP out for his birthday later, I kept lunch light with a peanut butter and jelly sandwich on whole wheat. I didn’t mind this one so much since belly treats were just a short time away.

I got off work early for the holiday, and met CP at Columbus Circle to walk down for drinks at House on Brews on 46th, and then dinner at 5 Napkin Burger, a spot he’s been wanting to go to for a while. He’s obsessed with burgers, a food hobby I’ve never had any qualms about.

Thoughts of 5 Napkin are still making me drool. I got the Original 5 Napkin, a beef burger with caramelized onions, gruyere cheese, rosemary aioli on a soft white roll. CP got the special burger of the night, with blue cheese and bacon. I almost cried. The fries were thin and salty and I thought about spilling those into my bag as well. I also had a few bites of a brownie sundae that was CP’s birthday treat.

Literally still full from dinner, I didn’t eat breakfast until about noon, and I only wanted a little something. I made my own pop tarts last week, so I ate two strawberry ones. I also made smores tarts filled with Nutella and fluff, but those were already gone.

I swear, all day I was still full from all the rich food, but on the way back to Hoboken from Queens (where I planned on having some friends over for July 4th) CP and I picked up Italian sandwiches from this deli called Luca Brasi’s. I love this place—it’s so cheap, easy, and fast. I got a Big Paulie: prosciutto with sun dried tomatoes and mozzarella, and CP got another sandwich with a mob name, with turkey, mozzarella, roasted red peppers, and arugula. CP also got fries. I ate two.

We also snacked on neon gummy worms from A&P, an impulse buy (2 tubs for $5) while watching the movie, Shutter Island, which I highly recommend.

Woke up early, pumped for the holiday. Early for the weekend is 10:50 am. I scrambled eggs for myself and made coffee for whomever wanted it. My routine is to drink coffee out of my nudie lady mug. 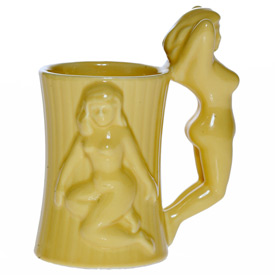 The rest of the day consisted of lounging around with friends and getting ready for a little holiday BBQ. I bought a $15 grill from A&P, and CP was named the official Grillmaster Flex, since neither me, or my girlfriends had any idea what to do with a little charcoal grill.

By the end of the day, I had eaten the following: a cheese burger, a large portion of the five pounds of potato salad that Rach and I made, and apple crisp with vanilla ice cream for dessert. And beer. And more neon gummy worms. Very American. I hadn’t seen our fridge so full in a longgggg time.

2 thoughts on ““The Splenda Stealer Diet””