Patience may be a virtue, but in today’s world, it’s also endangered.

I first became aware of my symptoms during a breakfast at work. There I was, at my desk, contemplating eating a banana. It was a little green at the edges, and originally, I thought, “I’ll just wait until tomorrow for it to ripen.”

I had acknowledged this. I had accepted it. But due to the lack of patience my generation suffers from, I was a goner. 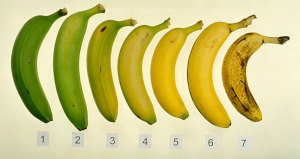 About half an hour later, having failed to fulfill the instant gratification that my banana craving would have satisfied, I start to get antsy. I picked up the banana again to get a closer look.

Still green. I knew quite well that the only thing that would help the banana ripen was time, yet, to me, that was just not acceptable.

With the banana peel in my hand, I knew I had a problem. What had I really proved? That an unripe banana was still unripe after opening it? Nope–only that I am a direct result of my generation’s lack of patience.

After that debacle, I’ve noticed some other symptoms: I will close my eyes when a web page is slow to load, willing it to do so, and I will pour pasta into water that is a few minutes short of a rolling boil, usually while eating the dry pasta. I also ended up deleting what was quite possibly an important voicemail at work by trying to beat the voice prompt. The recording speaks so slowly, in an effort to speed up the process, I hit a few buttons and ended up deleting the message before I listened to it.

I’ve also seen these traits in my friends. We are so used to texting and messaging each other with instant responses, reading real time newsfeeds on Facebook or Twitter, and calling the shots as to how we even receive information, we’ve essentially become control freaks.

If we can’t have it our way, we want nothing to do with it.

I say we reclaim our patience. My walk from the PATH is a solid 10 minute walk, and exercise for me in more ways than one. Physically, it’s great, but also, it’s a way for me to practice patience, in the sense that no matter how many different ways I’ve tried to walk that route, however many ways I’ve tried to cross the streets differently or walk diagonally, I cannot for the life of me shave any time off that 10 minutes.

I believe that for people my age, we need to teach ourselves patience, or, at least unplug every once in a while. Otherwise, the next thing on the endangered list will be bananas, and that will be the least of our problems.