Ear muffs, Hoboken. Ear muffs. You know I love you, but NYC still knows how to tug at my heart strings.

Enter: a quintessential New York moment. By definition, moments like these are when you encounter a humbling, human, crazy, embarrassing, or wickedly funny situation, aka, a “you can’t make this stuff up” moment, on the streets of NYC.

As much as this city can be a fickle, it can also deliver these wonderful instances where for even a split second, you feel a connection with fellow strangers just for having witnessed or experienced something together.

Case in point: a stroll in the new High Line Park. For those of you who have not been hit over the head with coverage of this park, it’s an elevated public space built on a 1930s former freight rail structure that runs from W. 12th St. to W. 20th St., with plans to continue up to 34th St. Currently, the space is so trendy, it even has its own blog.

Nonetheless, it’s pretty cool. Greenery pops up among thoughtfully placed planks, which in some spots playfully reveal the old railway, and benches with backs that permanently recline provide an interesting and relaxing environment.

Friday evening, after dinner at Los Dados, a Mexican restaurant next to one of the park’s entrances, Ria and I decided to go for a stroll to see what all the fuss was about. But it wasn’t until we reached the end of the park at 20th St., where things got interesting. A small crowd had formed. Walking closer, we realized the warm glow and soft voice we heard from further back was not an installation of the park, but instead a singer, entertaining with some jazz standards from her very own fire escape. 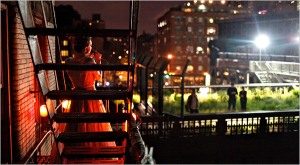 I felt like I was watching an Edward Hopper painting spring to life. Between the old standards and the look of her red dress against the building’s rust-colored brick, the colors were so rich in contrast to the park’s pale greens and grays, you could not look away. She even had a few colored stage lights out in front to soften the spot lighting from the park lights that actually shine directly at her window, creating the perfect space for a stage.

It was such an intense moment that even when this incredibly creepy man seemed to curl out from behind my right shoulder and ask, a little too closely, if I thought that this was just as amazing as he did, in awe of the scene, I didn’t even back up as I told him that I did, I really did.

Of course, when I got home, I Googled to see if this cabaret singer popped up–and of course she did, and her “renegade cabaret” is profiled here. This article made this moment seem a little less special, but I’ll conclude with a great quote from the article, that seems to sum this all up.

“As for the lights that shine like kliegs into Ms. Heffley’s [the singer’s] windows, Robert Hammond, a founder of the Friends of the High Line said ruefully, “We screwed up on those.” But he brightened when told that she had said they were good for a stage. The Renegade Cabaret, he said, “is born of a mistake, just like the park.”