For dessert we had banana bread, blondies and brownies. I exercised self control and only ate a blondie…and a brownie.

For this week’s installment of the “Splenda Stealer Diet,” (a few weeks late) we have my friend and roommate, Rachael, who documented her delectable munchies while on a beach getaway. In between nibbles of hummus, a bar appetizer called “jalapeno bottlecaps” and popcorn and brownies, she sunbathes and enjoys being a beach bum with her cousins before the very last of summer.

Let’s take a look at her week of eating.

Not being shy, here is Rach enjoying a frozen hot chocolate at Serendipity III.

END_OF_DOCUMENT_TOKEN_TO_BE_REPLACED

Continuing with the “jazz for breakfast” diet, Wes Montgomery made a lovely addition to my morning commute…

To change things up a bit, this week’s addition of “The Splenda Stealer Diet” will be a music diary, instead of a food diary. Although I can attest that Clint, aka, the bf of this Splenda Stealer, aaka (also, also known as) the bass player of Men and Whales, is a bona fide burger fanatic, enjoys the occasional late night Hot & Spicy Shim cup, and has a slight obsession with Portobello mushrooms and onions, I also believe that he has the unique ability to survive on decibels rather than calories.

They say that as long as a person has water, he or she can survive for a long time without food. For Clint, it would have to be music.

Let’s take a look at his week of listening. 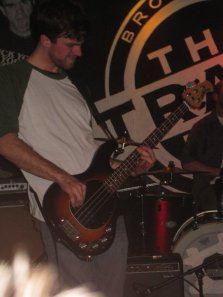 = Clint listening on the subway

END_OF_DOCUMENT_TOKEN_TO_BE_REPLACED

I took a gamble because I had a meeting around lunchtime and was hoping food would be on the company. Luckily, I was right…

We all know what being on a budget can mean–sometimes you have to play the lame card, and pass on pricier delicacies. But, the key to being creative on a budget is to be selective, as my friend Mary demonstrates in this week’s installment of “The Splenda Stealer Diet,” who’s anything but lame as she noshes on late lunches of fried goodness and Coronas at Coney Island, pierogies on the company, and sno-cones in the park. Let’s take a look at her week of eating.

Mary looking at chocolate in Seattle.

I tend to think of myself as a fairly healthy eater. I think it’s easy to keep up with: I give myself a $25/week budget for groceries, which means I have to be thrifty and usually stick to the produce aisle and work with my never-ending supply of pasta and tuna at home. I’ve learned over the years how to be more creative: my old roommates could’ve written this for me because I ate the same thing every single day: breakfast: toast, lunch: salad, dinner: egg, salami, and cheese sandwich. Really boring, but I eventually got out of that rut.

END_OF_DOCUMENT_TOKEN_TO_BE_REPLACED

‘Discussing the logistics of our jobs at 9 am is so much easier when I’m downing an iced latte and a croissant.’

For this week’s installment of “The Splenda Stealer Diet,” we take a look at Maria, my friend and roommate in Hoboken, who enjoys lunches with co-workers in Union Square and has an affinity for iced coffee (nicknamed her morning milkshake, as its 50 percent half coffee, 50 percent half-and-half), freezing and then snacking on chocolate and gummy candy, all while constantly fighting a debilitating, yet delicious craving for Pad Thai. Let’s take a look at her week of eating. 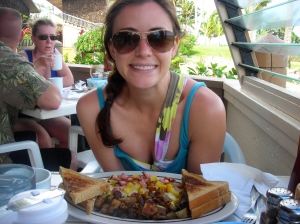 Maria, about to dig into her Hawaiian omelet while on vacay in Maui. She notes that instead of maple syrup on the table, they had coconut syrup!